It seems most people are still happy with the notion that a Coach’s Role is to make all the Decisions on how a Team is going to operate on and off the field. That they should provide all or at least the majority of answers of how to work effectively as a team.

But isn’t the very essence of a good TEAM as the acronym suggests, Together Everyone Achieves More? So how do we expect to develop Decision Making players and bring them together as a team of collective Decision Makers,  if we as Coaches, are making all the decisions and giving all the answers?

Why woupd we as coaches and teachers of the game, instruct players when we could facilitate learning in this way. Because isn’t Sport about decision making ? #learning #development #sport #performance pic.twitter.com/HXf396zFx3

ON AND OFF FIELD DECISIONS

Let’s start with Off the field; There’s a lot to decide: How often should you train? What will happen in training? What does each player need? What does the team need?

How many Coaches would involve players and make those decisions together as a team, or should we by-pass the participants since we’re the ‘expert’ on those things?

Then there’s On-field matters to decide on. The formation, the line-up, the subs and any changes that are needed during the game. Again, do they make those calls themselves or invite a collaboration of ideas?

Fair enough, let’s get the Coach to make the final and immediate calls, but what about the actual decisions moment to moment in the game? You know, where the players are positioning themselves, what they do with and without the ball?  These decisions can still be dominated by what the Coach has decided on how the team is going to play.

So should we as the Coach, impact on those decisions during a game? For if we start telling players where they should be in each and every moment, is that actually helping? Is it really helping them to read the game, the opposition and their own teammates? Wouldn’t it actually be stifling players learning and potential to make those decisions for them, not just as individuals but as a whole team? 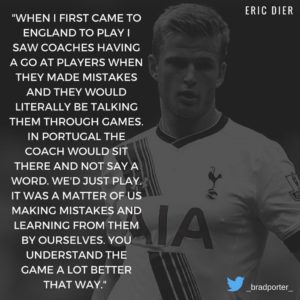 IT’S THE COACHES DECISION HOW THE TEAM MAKES DECISIONS

Ultimately, the Coach is held accountable and responsible for the team, so it becomes their own decision how the team makes decisions. Do they become ‘the Boss’ and stamp their authority on the group to get everyone to conform to one-way of thinking or do they use it as an opportunity to Facilitate a team to work together and value each individual’s contribution?

This then brings the main difference

How do you Coach? Are you a Decision Maker or Decision Facilitator?

Do you use your Power to Empower?

Coaching For Learning Not Performing

FROM DECISION MAKER TO DECISION FACILITATOR

Surely we as Coaches need to be providing as many experiences as possible for PLAYERS to make decisions? Not giving them OUR answers, but giving them the freedom and confidence to find their own.

Yes, that takes expertise in Facilitating an environment where the whole group can contribute and collaborate effectively. Perhaps that’s why many take the easier, quicker option of making all the calls themselves.

But when we know that the benefits and potential of developing Decision Makers and a Decision Making Team, far outweighs a group of robots, I know which Coach I’d rather be. What about you?

So, just by making that one adjustment, going from Decision Maker to Decision Facilitator, or going from providing answers to providing questions, we enter a whole new realm of potential for teams and players, including the rarity of creativity, unpredictability, chemistry and connection as a team.

We also move towards higher levels of strategic adaptability within games. No need for the video session to study how a team has played in the past, these players are experienced at a working out problems and coming up with solutions, where and when it matters most, IN THE GAME.

So let’s change the perception of the Coaching role from Decision maker to Decision Facilitator. We might even starve off the grey hairs!  The pressure on a Coach to be front and centre, take control and set standards for their team doesn’t need to be there.

Let’s take this pressure off through taking a Facilitator’s role.

What is a Facilitator?

The role then becomes more of a Designer of the environment. Observing, supporting and trusting the interactions and learning dynamics of the individuals and team.

We change from being expected to have all the answers, to asking questions, drawing out the potential of individuals and collaborating together.

The beauty of a Facilitative Approach is that it’s less stress on us as Leaders and more affording for Learners in confidence, challenge and connection with their peers and their game.

It is quite a challenge to evolve the old Boss method, that’s why I’m inviting you to a Facilitative way – THE GPL WAY!

GAME PLAY LEARN is a Facilitative Approach to Learning

I’m finding so much more ENJOYMENT and LEARNING for players, and less STRESS and PRESSURE on us as Coaches.

Best of all, we can be confident in putting the decisions where they need to be, with the players.

We can be proud that we are no longer the Decision Makers but Decision Facilitators.

4 Comments on “From Decision Maker to Decision Facilitator”

This site uses Akismet to reduce spam. Learn how your comment data is processed.